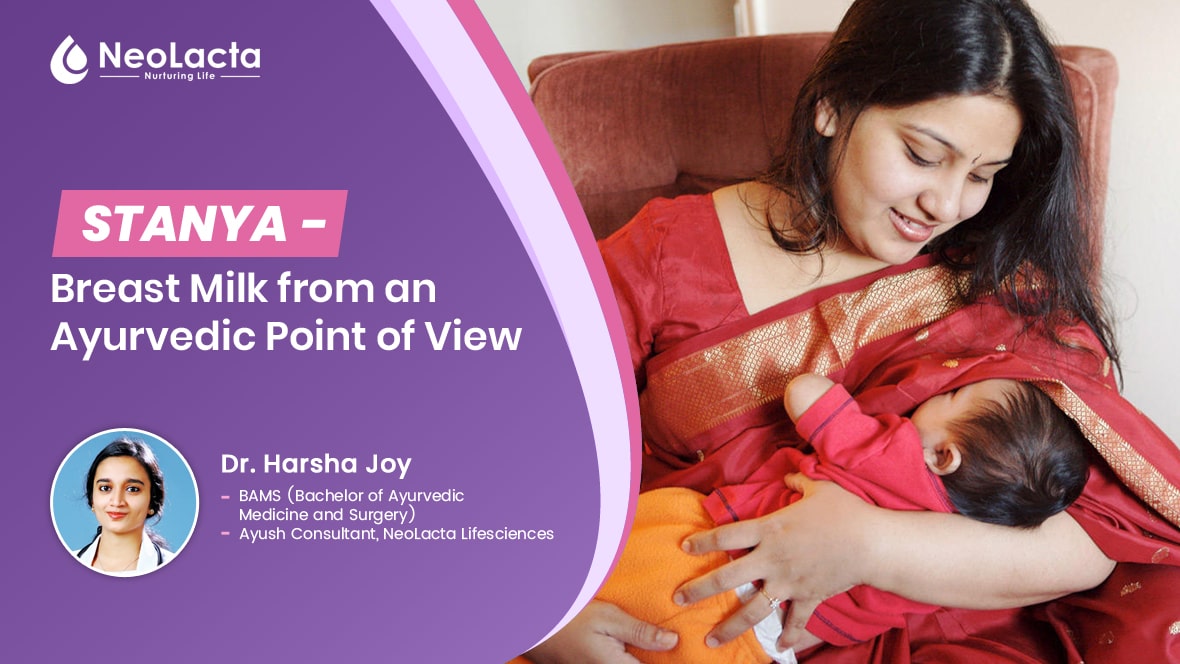 STANYA – Breast Milk From An Ayurvedic Point Of View

Motherhood is a lifelong commitment. It comes with its ups and downs, excitement and anxiety, pride and agony, and of course a lot of memorable firsts. A mother cannot forget the first time she held her baby against her bosom- a tiny tot wrapped in delicate covers, eagerly waiting for her doting. The first drop of mother’s milk is the first caress to an infant’s soul. Yes, breastfeeding is not only a bonding moment but also a rite of passage for every mother. This symbiotic relationship between a mother and her young one is essentially one of the factors that ensure the continuity of life.

Breast Milk is the pivotal component and the initial source of nutrition in every being’s life. Every culture respects it and every medical science praises it. Ayurveda, the ancient science of life, stresses its importance like it had been doing for the past 5000 years. Ayurveda calls breastmilk Stanya. Stanya, also known as ksheera, dugdha, piyusha, and payas has another synonym- balajeevana. The term balajeevana means something that vitalizes and nourishes the child. Ancient Ayurvedic scholars have given much-needed information about various aspects of stanya, including its formation, ejection (stanya pravritti), qualities of good stanya (stanyaSampatt), weaning (stanya apanaya kala), etc. Let us dive deeper into the Ayurvedic facts about stanya.

Ayurveda has a very unique concept when it comes to the composition of a living body. It believes that the body is formed by 5 elements (panchamahabhutas- Prithvi, Ap, Tejas, Vayu, Akasha), and is controlled by 3 bioenergy’s (Vata, Pitta, Kapha), and 7 tissues (rasa, rakta, mamsa, medas, asthi, majja, shukra). These 7 tissues or sapta dhatus represent different components of the body- for example, rakta symbolizes blood, asthi the bones, majja the bone marrow, mamsa the muscles, etc. Rasa can be correlated to all the fluidic elements of the body other than the blood, and that includes breastmilk too- it is said that a part of ahara rasa (assimilated nutrients from the food) reaches the breast when it is time and becomes stanya. Even modern science will also agree that the nutrition of the mother impacts breastmilk formation! Some Acharyas describe stanyavahi siras, which no doubt can be correlated to the breast ducts and lobes that carry milk.

Eminent scholars like Susrutha have recorded that the prime reasons for lactation are the thought, sight, or touch of the baby. One Ayurvedic opinion regarding the physiology of milk secretion is that, when a woman has delivered her baby, her bodily channels will become clear and rasa in the form of stanya will be filled in the breasts. Another opinion is that the milk ejection reflex is triggered by the opening up of channels in the hridaya region so that the milk could be pumped out. The Kapha-rich first milk is called piyusha, which could be roughly translated as the elixir.

It is important to feed good milk to the infant. The presence of breast milk can talk a ton about the mother and baby’s health. According to Acharya Charaka, the breast milk will have normal taste, smell, and consistency, and will instantly dissolve when dropped in water. Acharya Susrutha opines that breast milk will be of the color of a conch shell, ie, yellowish-white, is cold, slightly sweet, will not produce streaks, and will never float or goes down to the bottom when a drop is placed in water. All scholars are unanimous that breast milk is easily digestible, provides longevity and health to the child, and is free from impurities or discoloration. According to Ayurveda, vitiation of doshas (vata, pitta, and kapha) can in turn vitiate the stanya, and hamper its taste, smell, color, and consistency. Such vitiated stanya is called dushta stanya and is not conducive to the infant. A plethora of maternal factors can yield dushta stanya– like, a mother suffering from physical and mental ailments, suppressing her natural urges, excessively consuming foods made of meat, fish, curd, jaggery, and liquor, having too much acidic, hot, and salty stuff, awakening at night, worrying a lot, getting too much exercise, under pressure or anger, etc. The mother’s bodily doshas can be influenced by her above-mentioned activities, leading to these vitiated doshas mixing up with the stanya in stanyavahi siras.

According to major treatises like Ashtangahridaya, eventual weaning should be started when the teeth begin to erupt. The best practice is to continue breastfeeding, accompanied by a light and nourishing diet. It has to be done gradually and afterward, the baby has to be introduced to solid foods.

Breastfeeding has been recognized by various systems of medicine as the optimal nutrition for the baby as it provides all the vital nutrients in the right quantity. Hence mothers should be encouraged to initiate breastfeeding soon after birth and continue exclusive breastfeeding for the first 6 months of baby’s life followed by introduction of solids while continuing breastfeeding.