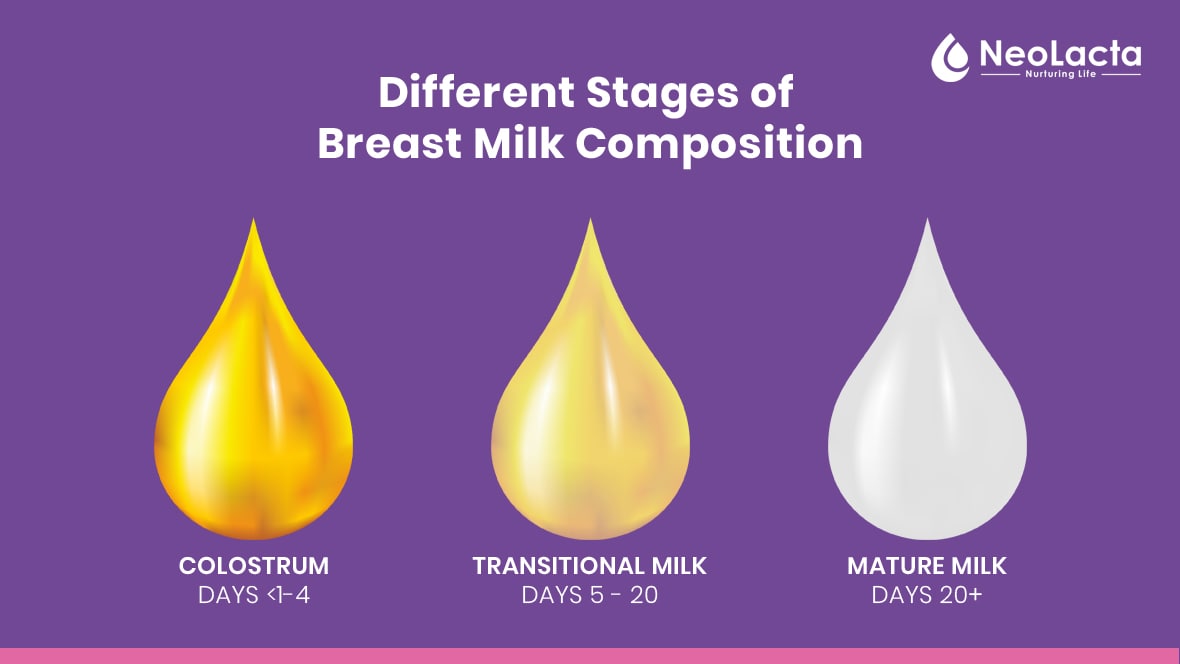 Breast milk is the main source of nutrients for a baby. A woman body start preparing to create a new food supply for her baby during pregnancy. From 4th week of pregnancy, milk producing cells called lactocytes starts forming. You might start noticing your breast growing during pregnancy but how much milk you produce depends on the milk producing tissues. The milk production cycle only begins once your baby is born.

A mother’s milk provides all the essentials nutrients like proteins, minerals and fats, as well as water to keep the baby hydrated. Breast milk is no ordinary food – it’s the living “liquid gold”.

Colostrum occurs during pregnancy and last for several days after baby’s birth. This yellowish sticky milk is thicker and is very important for protecting your baby. Colostrum is very easy to digest.

Colostrum has same nutrients as later stages of milk however the amount of these ingredients varies and it’s tailored in such a way it suits the new-born baby.

The first milk colostrum is high in antibodies and white blood cells. It protects your baby from infections and very important for the digestive system.

After two to four days, Colostrum replaces with transitional milk.

Transition milk replaces Colostrum. It’s creamy and has high level of proteins, vitamins, fat and lactose. The color of the milk slowly changes from yellow to white. As the breast starts to stimulate you might feel fuller, firmer and a bit of discomfort. Regular feeding can ease any discomfort during this stage.

After few weeks, your milk reaches mature milk. It is lighter in color and stays consistent. But composition of your breast milk can still change from day-to-day and feed to feed.

For example, if you or your baby is unwell, your body will make antibiotics that will help fight the illness. As your baby grows the composition of the milk changes to meet as per the child’s growth.

Fore milk – Milk that flows at the starting of the feed is Fore milk. Its watery and quenches baby thirst.

Hind Milk – The milk that flows as your breast empties is Hind milk. Its higher in fat, calories and quenches babies hungry.

Fore or Hind milk your baby will get the essential nutrients required for the growth.

The mature milk will last until you wean for the baby. As your child grows older and introduced to solid food and liquids, the nutrient and amount of milk produce changes.

IPA recommends a minimum of 6 months and can go up to 2 years. The longer a mother feeds the child with breast milk, the greater health benefits for both mother and child.

Nothing can replace breast-milk, you both can enjoy the benefits of breastfeeding for many months to come.