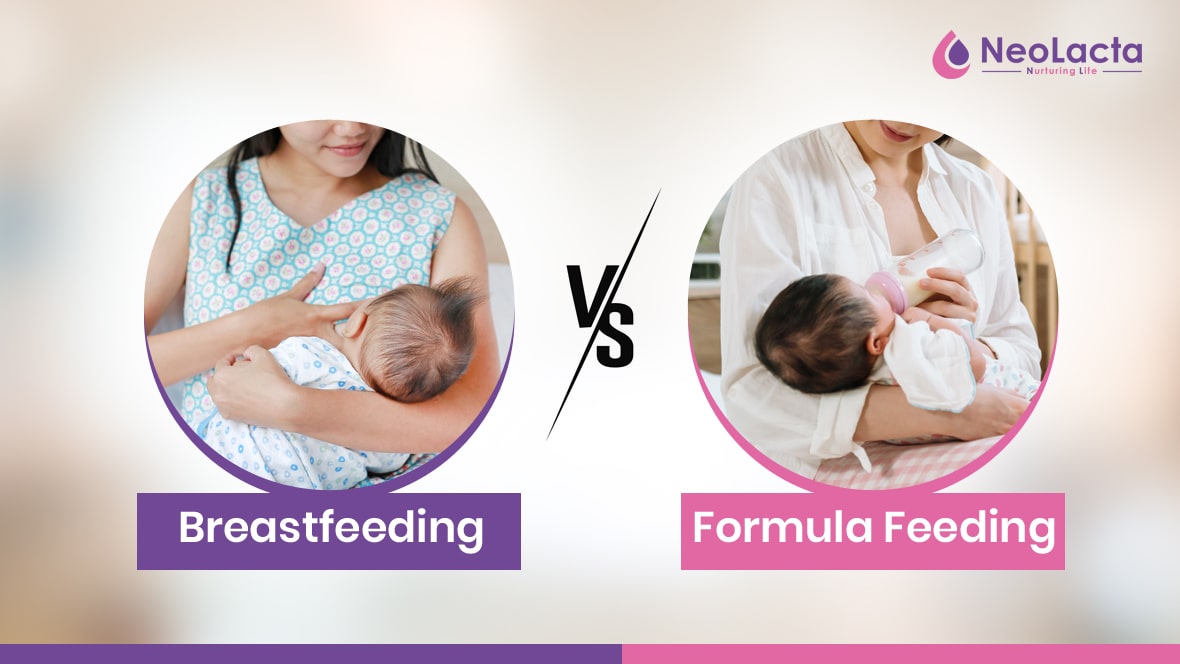 Breast is Best – is what most of the pediatricians say as there are numerous benefits of breast milk. Breast milk is designed for human babies and mother’s milk provides all the nutrients like carbohydrates, proteins, fats and minerals to keep the baby healthy.

The composition of breast milk and formula milk

The composition of breast milk and formula milk is diverse. As formula manufacturing companies try replicating mother’s milk as it is made of cow’s milk, nutrients like artificial vitamins, minerals and hydrogenated fats are added to formula milk, which makes it difficult for babies to digest.

“Did you know the salt [sodium] content in cow’s milk is pretty much at toxic levels for babies?” says Professor Peter Hartmann, a well know renowned authority associated with the first breast milk bank, Western Australia.

Mothers milk is a living miracle fluid. It adapts to the baby’s changing needs. If mother or her baby is unwell, her body will make antibodies that will help fight the illness and protect both mother and baby against infection.

Why not formula milk?

Mostly baby formula milk is made of skimmed cow’s milk with added emulsifiers and stabilizers. Fats in formula milk is hard to break and very difficult for the baby to digest. The composition of nutrients varies from brands and country. The most common ingredients in formula are:

Scientist have shown there are more than 1,000 proteins in breast milk (1) and formula milk only one or two of them. This is one of the drawbacks of formula milk leading to higher health risk in the long-term.

The dangers of Infant Formula:

According to a report, India’s formula consumption grew from 24,480 tons to 27,783 tons in the last four years.

In 1991, UNICEF launched the baby-friendly hospital initiative, where hospitals are declared “baby friendly” on meeting a set of criteria that exclusively encourages breastfeeding. However, 25 years later, only 15,000 facilities in 134 countries have been awarded the baby-friendly status.

“From allergies to obesity to asthma, there are many long-term consequences of formula-feeding on health and well-being of the baby. Many of the lifestyle diseases that we are looking at today have their roots in infancy. We need to give babies the food meant for them, which is breast milk.”

A research done by Slupsky, Bo Lönnerdal, and their colleagues observed just after four weeks, the formula-fed infants were larger than their breast-fed counterparts, had developed distinct bacterial communities in their gut, had higher insulin levels, and were metabolizing amino acids differently (2).

The formula-fed babies grew quickly—perhaps too quickly—which researchers link, in part, to excess protein. “Parents want their baby to grow but growing too quickly is not such a good thing,” says Slupsky. She hopes her findings will help new mothers and the physicians who advise them to make informed choices about what to feed their babies.

Why only breast milk?

As your baby grows the composition of the milk changes and adapts to meet as their requirements for growth and development. Breastfeed babies receive the most health benefits from mother’s milk.

Breast milk helps the babies resist infections and reduce the incidence of serious illness such as,

Due to better immunity and brain development breastfeed babies also perform well in school (3), better behavior (4) and eyesight (5). It also reduces the risk of obesity, cardiovascular diseases and Diabetes 1 & 2 (6) & (7).

It also benefits the mother to burn calories and lose weight. It also helps the uterus to shrink and lowers the risk of developing breast and ovarian cancer (8).

Why Breast milk should be prioritized over Formula?

Breast milk is very economical and is readily available. It saves a lot of money and time when a mother breastfeeds her baby.

It saves a lot of time for you, there is no need for washing up the bottles, sterilizing, preparing for formula, checking for the right temperature etc

Breastfeeding also adds a great value when babies are introduced to solids. Since the food that a mother eat adds flavour to her milk, babies easily get adjusted when solids are introduced.

The benefits of breast milk are incomparable and cannot be replicated.

Mothers milk, time-tested for millions of years, is the best nutrient for babies because it is nature’s perfect food – Robert S. Mendelsohn