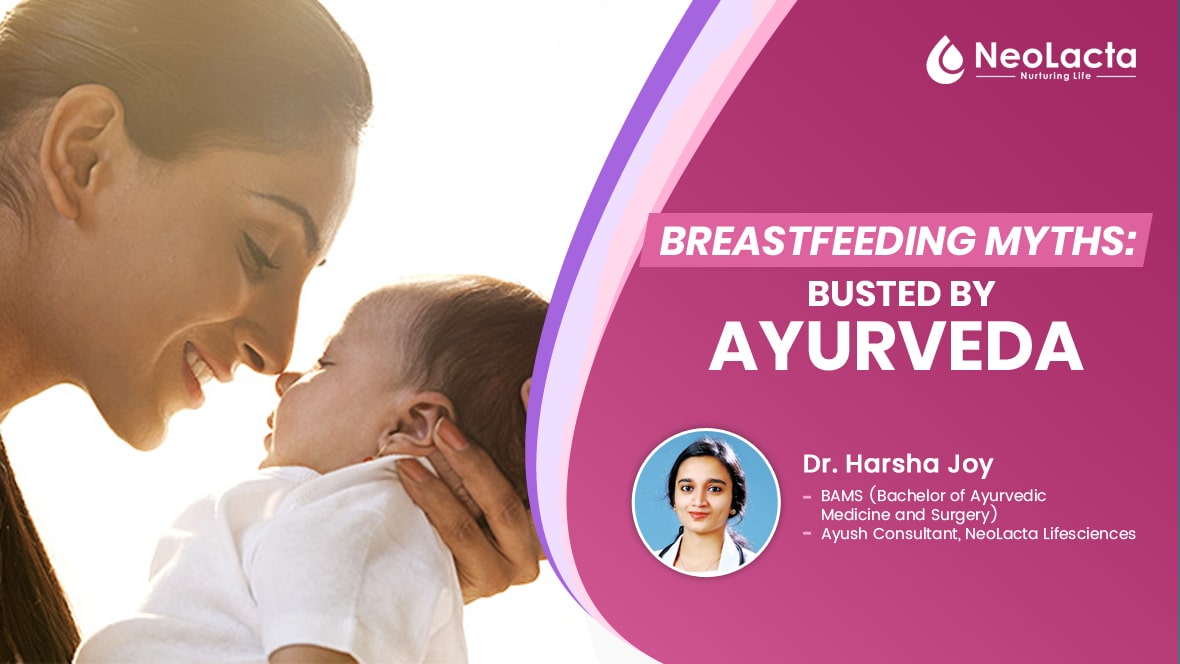 Myths and taboos related to breastfeeding are pretty popular because we don’t talk about it enough. Breastfeeding is a sacred process that seals the bonding between a mother and her newborn. As the joy of motherhood trickles down her bosom, the mother unites with her infant by an inseparable invisible cord, a physical, psychological, and spiritual connection. Breastfeeding is the only mode of nutrition for the child till the weaning period and is also a healthy practice for the mother. Ayurveda has several nicknames for breast milk- balajeevaka (that which vitalizes the child), and piyusha (elixir) are just two of them. According to this ancient science, pure breast milk is light, nourishing, yellowish-white, easily digestible, conducive to the child, appetizing, and enlivening. Ayurveda divides infants into three based on their food preferences- ksheerapa (newborns that can thrive on milk only), ksheera-annada (infants who rely on milk and light solid foods), and annada (children who have had weaning). As a science that has a lot to tell about obstetrics, gynecology, and pediatrics, let us allow Ayurveda to bust some myths regarding breastfeeding.

Myth No.1 – Formula milk- a one-stop solution to the absence of breast milk

Artificial milk or formula milk is the milk substitute given in the absence of breast milk- either when the mother is unable to lactate or when the baby is incapable of suckling. Artificial feeding has always been a subject of controversy. The end of the 18th century marked the beginning of scientific research regarding substitutes for human milk. Numerous chemical analyses and evaluations were done for the same until Justus von Liebig of Germany came up with the first-ever formula milk in 1865. He patented and commercialized it under the name Liebig’s soluble food for babies. His formula consisted of cow’s milk, malt flour, wheat flour, and potassium bicarbonate. The product, initially marketed in liquid form later changed into powder form for ease of preservation. Several hundreds of companies began successfully developing the infant milk formula, including our household names Horlicks and Nestle. The modern-day formula has given itself a makeover, sprucing it up with new ingredients like fatty acids, vitamins, minerals, plant-based oils, probiotics, enzymes, etc. The rise of such corporates also led to a decline in breastfeeding rates. Anyway, despite the disputes and dissension, formula milk continues to be the prime ‘solution’ for the absence of breast milk.

Whipping up a chemical cocktail in the laboratory and then spicing it up with some vitamins and minerals is not the right way of substituting the human milk. The mother’s milk is rich with a multitude of components that cannot be synthesized artificially- antibodies, hormones, WBCs, stem cells, good bacteria, enzymes, and nucleotides being some of them. Colostrum, the first milk, is a way of lining your baby’s digestive system. Even its milk-like consistency has relevance when it comes to an infant’s immunity. Therefore, substituting it with a laboratory-curated substance is not going to end well.

Ayurveda recommended the practice of having a dhatri (wet nurse) to provide infant nutrition. It was a common practice for centuries as there were no other means. Not compromising the nutritional requirements of the baby was the first and foremost concern. History says that wet nurses were prevalent up to the 19th century in different countries and later ceased to exist. The practical solution offered by Ayurveda in absence or unavailability of mother’s milk is donor human milk.

Myth No.2 – Immediate breastfeeding is not indicated in Ayurveda

The importance of feeding the baby immediately after birth cannot be stressed enough. The first bond between the mother and the baby arises during this time, and the baby has to be fed in order to compensate for its laborious journey from the womb to the world. Plus, the reflexes of the baby will be powerful during the first hours of birth. Ayurveda refers to the first milk as piyusha (elixir). The Ayurvedic anatomy of the breast mentions the ksheeravahi siras (the channels that carry milk). One Ayurvedic opinion regarding the physiology of milk secretion is that, when a woman has delivered her baby, her bodily channels will become clear and body fluid in the form of milk will be filled in the breasts, and this can be correlated to the first milk/colostrum. Another opinion states that on the third or fourth day of delivery, the channels located in the hridaya open up completely, leading to the flowing of breast milk- this can be considered as the transitional milk, the one that replaces colostrum after 2-5 days of childbirth. Some scholars like Vagbhata say that breastfeeding should be accompanied by praashana (confections processed with herbs conducive to the baby’s health).

Myth No.3 – Mother should eat plain food/ should eat anything she wants

While it is proven that the food choices of a mother influence the child, it is safe to assume that not everything is conducive to an infant’s health. The child might be acquainted with its mother’s tastes from the womb itself, but certain food can cause reactions in babies. Therefore, it is important that the mother should pay attention to what she eats in a day. The mother has to follow a balanced diet, but that does not mean that she has to eat plain, flavorless foods. According to Ayurveda, breast milk (stanya) is derived from the ahara rasa (assimilated nutrients from food), and hence, the quality of food essentially determines the quality of breast milk. Mothers consuming non-conducive foods like alcohol and practicing fasting during lactation can lead to complications in the baby. Ayurveda prescribes a dietary regimen for new mothers that will help them regain their strength after birthing and increase breast milk production.

Myth No.4 – Ayurveda prescribes weaning only after one year

There are specific references in the ancient Ayurvedic texts like Ashstangahridaya that weaning should only be started when the baby teeth erupt. Most infants start teething when they are around 6 months old, and it is the weaning period suggested by the modern sciences also. Scholar Susruta also has mentioned that the child can be given food (annaprashana) during the 6th month. Light but nourishing foods are advocated during weaning. Some of the classical mentions of weaning food include preenana modaka (sweet balls made of honey, parched paddy, etc; preenana means nourishing), deepana modaka( that which is made of jaggery, tender vilwa fruits, etc; deepana means carminative), and tarpana (a nutritive drink prepared from jaggery, Dhataki flowers, etc.).

Myth No.5 – There are no restrictions when it comes to breastfeeding

Like any other practice, breastfeeding also comes with a set of precautionary measures. While there is no doubt that the baby has to be breastfed, some rare occasions hold the mother back from doing so. Ayurveda warns about physical and psychological conditions in which the breastfeeding has to be temporarily paused, such as when the mother is kshudhitha (hungry), kshina (tired), shokarta (consumed by grief), jwaritha (feverish), garbhini (pregnant again), taking non-congenial diet, etc.