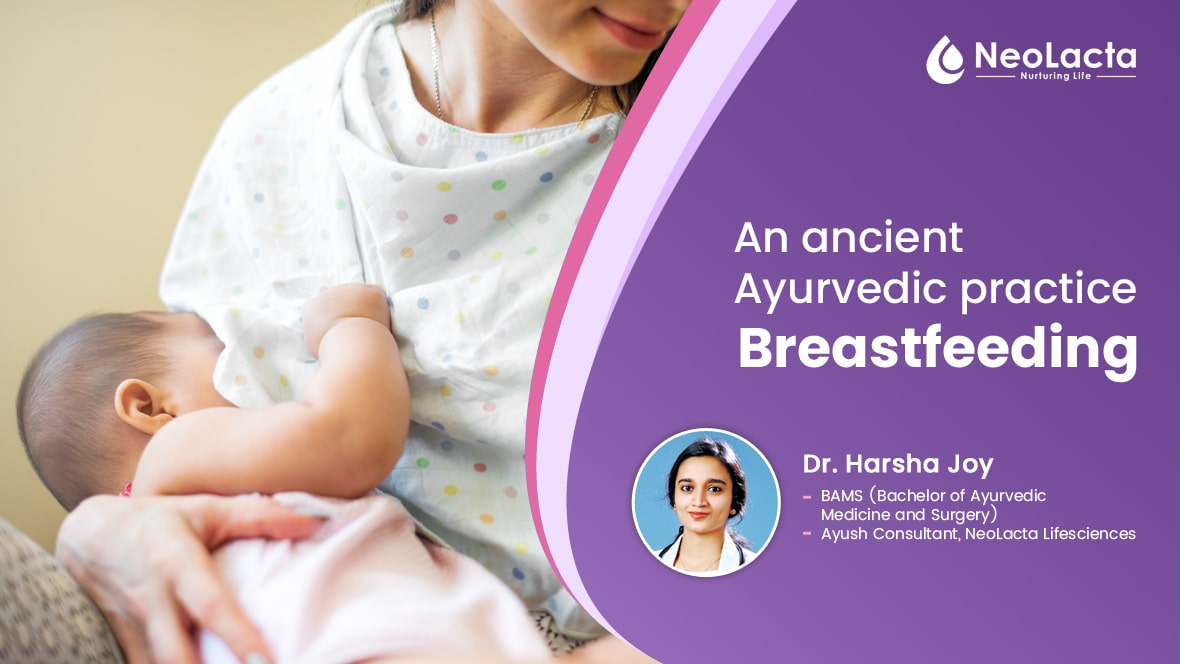 The journey from conception to delivery is incredible, from the moment you recognise the pregnancy to the moment the baby is placed in your arms. Is that, however, the end of the story…? No…….!! The following chapter starts quickly, with the infant crying out for milk.!! So, let’s get started.!! Let’s have a look at what the ancient science of Ayurveda has to say about the specifics of nursing.

Breastfeeding is largely acknowledged as the healthiest form of nutrition for infants. Hence, it’s important that we feed the only food for their hungry little tummies in the right way possible. For nearly all infants in their first year of life, breast milk is the best meal. Both the mother and the infant benefit from breast milk.! So, let’s have a deep insight into the topic.!

We are talking about Sampat-Stanya, The Pure breast milk as per the renowned Acharyas of Ayurveda.

Acharya Charaka, is of the opinion that milk that is normal in colour, fragrance, taste, and touch, and that which mixes uniformly when poured into water blesses the kid with sustenance (Pushtikar) and good health (Aarogyam). He describes the Stanya (Breastmilk) of such qualities as Uttama or best.

Milk that is sheeta (cold), pure, free of contaminants, sweet in taste, combines uniformly in water, that which doesn’t form streaks and froths when mixed in water, are the best Stanya quality attributes according to Acharya Sushruta.

So, coming down to the next lane of thoughts on how to nurse the baby.?

Breastfeeding is described in depth in the Ayurvedic writings and according to Acharya Charaka, a mother should start breast feeding her kid after taking a bath and wearing clean clothes. As well as it is instructed to tie prajasthapan medicines (such as brahmi, amogha, shatavari, and others) on her head.

Breast feeding begins after cleansing the child alongside the mother and cleansing of the mother’s breasts. It is mentioned significantly in the Ayurvedic classics that expressing a small amount of milk and chanting the specified mantra is also beneficial while breastfeeding. Acarya, Sushruta, Vagbhata and Misra give similar descriptions as well.

Breastfeeding and its Advantages.

Exclusive breast feeding, according to Acharya Kashyapa, results in a child’s growth, strength, longevity, and good health, as well as the absence of diseases. Breastfeeding is largely acknowledged as the healthiest form of nutrition for human new-borns. Breastfeeding should begin as soon as feasible after birth as it also has numerous advantages for both the baby and the mother. Breast milk contains all of the nutrients that a new-born requires for optimal growth and development throughout the first six months of life, including carbs, lipids, proteins, vitamins, minerals, and water.

When to stop nursing the baby? The weaning periods!

After the advent of teeth, the kid should be gradually weaned and given goat or cow’s milk along with a light and brimhana (nourishing) diet. Ayurvedic writings also go into great detail about the Stanya apanayana-vidhi (The process of weaning). It’s a crucial period for toddlers as most of them find it hard to fight the urge to not drink mother’s milk that they had been enjoying since they were born. Hence the classic insights give us assistance on how to do it efficiently.

Weaning is a stage when solid and table foods take the place of milk. Most infants reduce the volume and frequency of breast feeding between 6 and 12 months of age, after becoming accustomed to solid foods and liquids. Weaning begins at 6 months of age, with one meal introduced at a time while milk is continued until 12 months.

What are the contraindications of Breastfeeding?

There is an ideal state for the women’s body, when she is a nursing mother, as how her body affects the milk production and in turn the health of the toddler.

Apart from the fact that you should be feeding the infant, no-one really knew the right way of nursing a child nor tried to enquire on the same. Especially in a modern era where maternity leaves are short and when we have working mothers who find it hard to meet the daily needs of a new born.! But here we got you the ayurvedic back-up on how to do it and what to keep in mind while you lovingly feed your baby.!